How is graphite priced?

There are no standard, quoted prices for natural graphite and there is no spot or futures market.  Actual transactions in the marketplace are largely based on direct negotiations between the buyer and seller.  Companies such as Benchmark Mineral Intelligence and Fastmarkets IM are paid subscription services that periodically survey buyers and sellers and publish pricing information. Their prices are mainly provided by large, high volume buyers and tend to be conservative.  Most small buyers pay higher than published prices.

Graphite miners crush and grind their ore and separate the flakes of graphite from the waste rock through a standard industry process known as flotation.  The result is a concentrate that is generally 94 percent graphitic carbon or higher.  The concentrate is then sccreened to separate flakes of different sizes because larger sizes sell for higher prices.  A premium is also paid if the purity is higher than 94% and the price is discounted if it is less.  The most common flake sizes are +50 mesh (XL), +80 mesh (large), +100 mesh (medium) and -100 mesh (small).  The following table shows the prices of the various grades, the percentage of each that would be produced by the four Feasibility Study level North American projects, and the weighted average price they would expect to receive in the current market for their production.

Prices for +80 mesh large flake exceeded US$1,300/t in the late 80s but crashed to US$600-750t in the 90s as Chinese producers dumped product on the market. During this period there was essentially no exploration and no new mines were built in the west.  Graphite prices did not start to recover until 2005 and well surpassed US$1,300/t with large flake selling for up to $3,000/t in early 2012 with some shortages reported. Price appreciation was largely a function of the commodity super cycle and the industrialization of emerging economies as new, high growth applications such as Li ion batteries ("LiBs") had not yet had an impact on demand or consumption.

After peaking in 2012, graphite prices experienced a sharp drop due to the slowdown in the Chinese economy and a lack of growth in western economies.  Since that time they have been sideways to down as the market waits for continuing growth in the EV and the lithium ion battery industries to use up excess capacity in China.  The capacity issue was exacerbated by the commissioning of a large new mine in Africa.  The mine was well over budget, only operated at 50 or 60 per cent of design capacity and was consistantly cash flow negative until being shut down.  This has caused some of the surplus production capacity in China to be used up.  However, substantial new sources of supply are urgently needed if the expectations of automobile and battery makers are to be even partially realized.

Lithium ion batteries are now approaching 50 per cent of graphite demand and continue to grow rapidly even though the uptake of EVs has been slower than anticipated.  Almost all battery anode material is made in China from small flake graphite because it is plentiful and cheap.  The current picture for large flake prices is much better as Chinese production is declining, the African operation does not produce much and demand is growing.

Benchmark Mineral Intelligence estimates that the major auto makers have committed over US$300 billion to developing EVs and that there are over 200 LiB mega-factories in the pipeline.  These factories represent over 3,000 gWh of LiB production capacity which in turn equates to over 1,000,000 tonnes of new annual graphite demand by 2025.  In short, graphite production has to more than double quickly to meet this demand.  As a result, the outlook for graphite prices is very bright and the need for secure western sources of supply is critical. 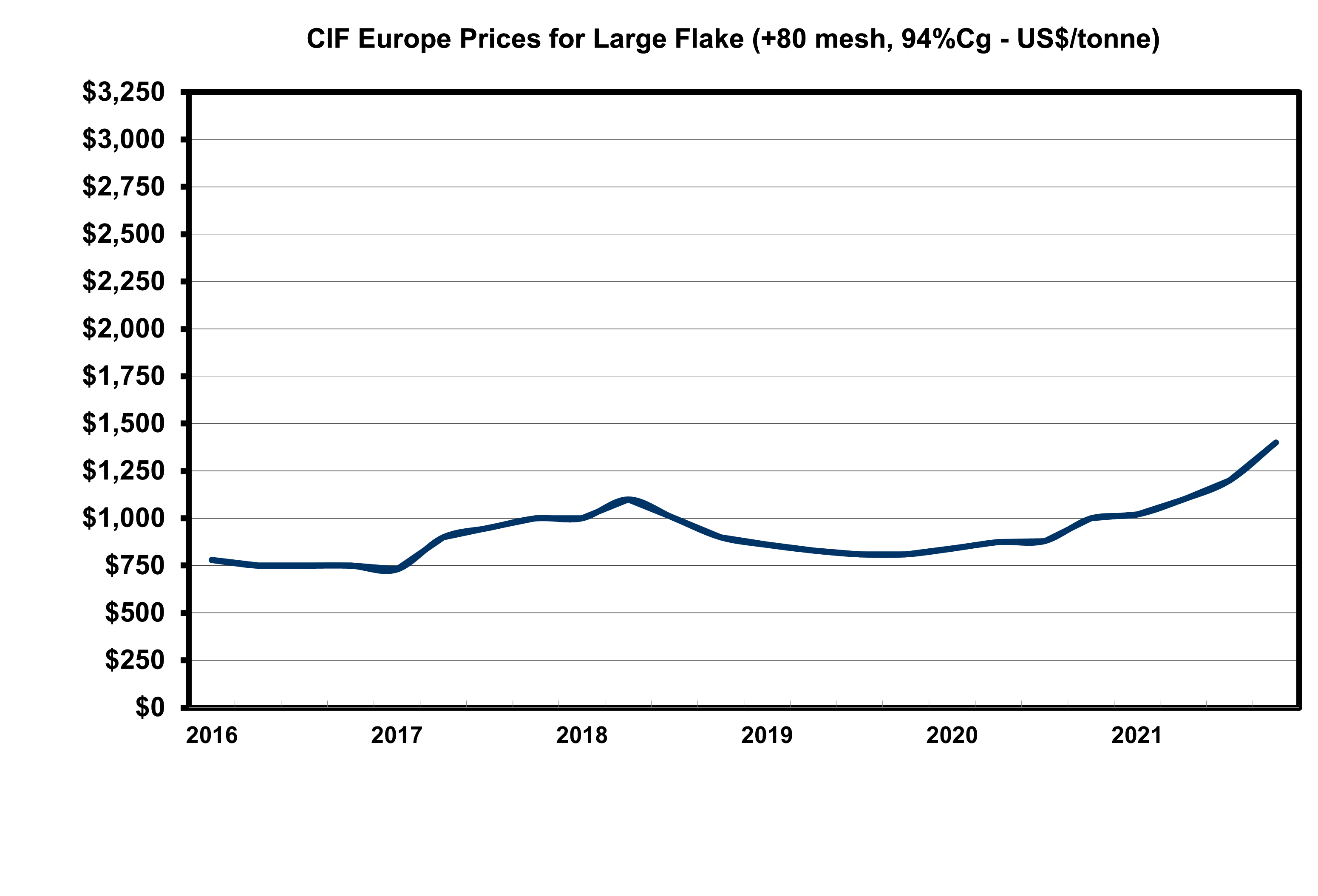