Okanjande/Okorusu on Track for Production by Mid 2023

July 11, 2022:  Northern Graphite Corporation (NGC:TSX-V, NGPHF:OTCQB, FRA:ONG, XSTU:ONG) (the “Company” or “Northern”) is pleased to announce the completion of a Preliminary Economic Assessment (“PEA”) for the restart of its Okanjande/Okorusu graphite operation in Namibia. The report, which will be filed on Sedar shortly, concludes that Northern can bring the project back into production by mid 2023 at an average production level of almost 31,000 tonnes per annum of graphite concentrate with a C1 production cost of US$775/tonne. The capital required to initiate production is US$15.1M which includes the installation of a new, two-stage grinding circuit, additional regrind equipment in the flotation plant, and a new tailings storage facility. 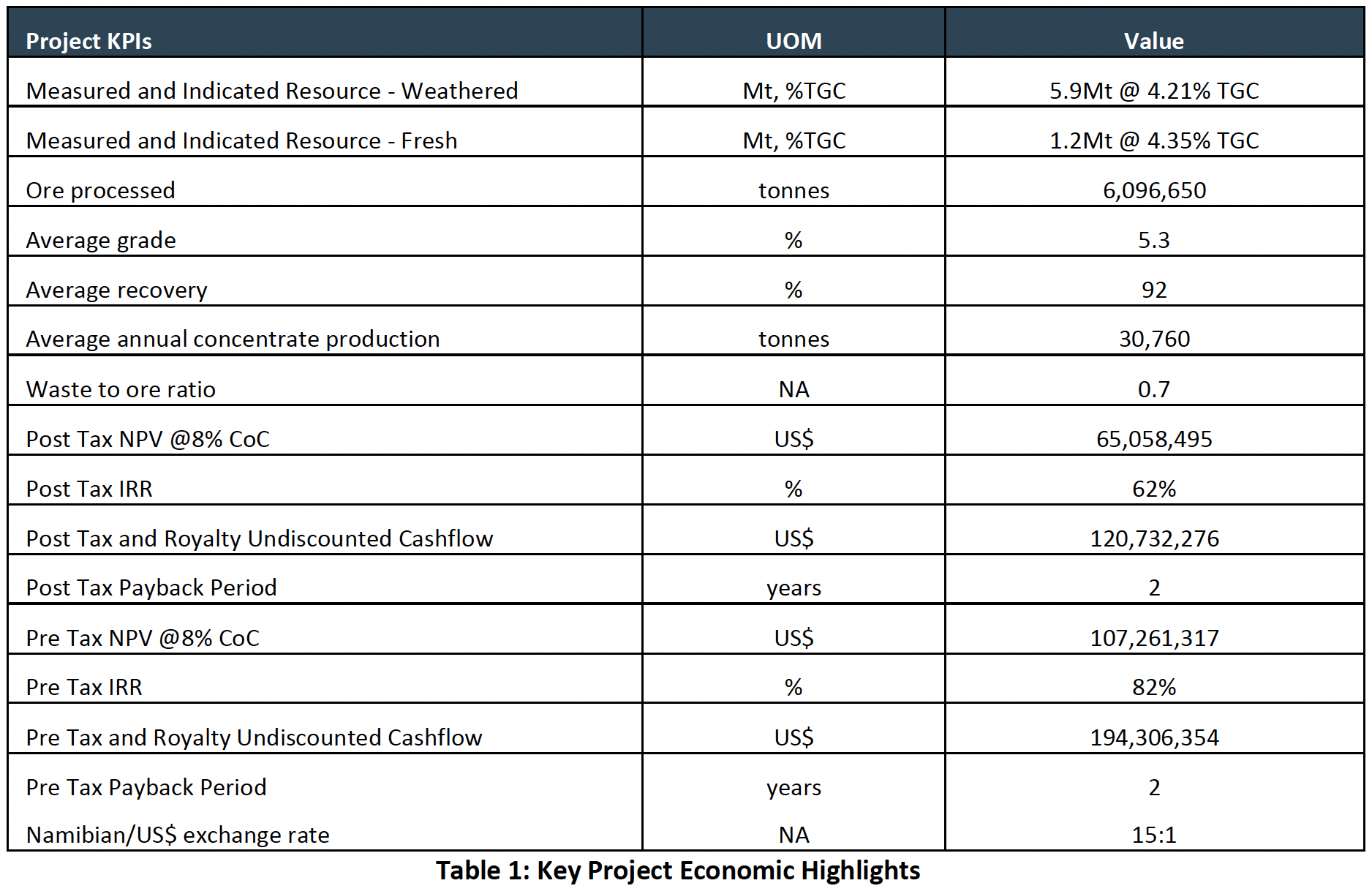 The level of accuracy for some of the key inputs are generally of a higher level than normally associated with a PEA as only “Measured and Indicated” resources are included and major capital and operating cost items such as large equipment prices and mining and trucking costs are based on fixed prices obtained in early June 2022.

The authors of the report, CREO Engineering (Namibia), also list the following opportunities for improving economics:

Exploration: There is ample evidence of more resources in the region. These need to be quantified by exploration and drilling.

Taxes, Royalties and Other Interests: There are approximately US$50M in tax loss carry  forwards relating to previous operations that could potentially be used to reduce taxable income.  This issue requires further investigation by the Company’s tax advisors.

Northern’s Namibian operations consist of the Okanjande graphite deposit and the Okorusu processing plant located 70km away.  Refurbishment of the Okorusu plant is well underway. The first 20 employees were engaged during June and have been active cleaning the site, stripping equipment, renovating offices and equipping the maintenance workshop. CREO has been appointed as the EPCM contractor, detailed engineering for the new grinding circuits has begun, and long delivery equipment items ordered. Further administration personnel are scheduled to join during July.

“The results of the PEA confirm our expectations for the project and validate the decision to proceed with the acquisition and re-development at both Okanjande and Okorusu. We are well underway towards achieving our objective of first production within 9-12 months with an excellent workforce that is highly experienced in mining operations and 100% sourced within Namibia.  The opportunity to expand production in the future is a huge, added bonus and something that Northern has already started to investigate,” commented Dave Marsh, Chief Operating Officer for Northern Graphite.

Northern Graphite is a TSX Venture Exchange listed Canadian company focussed on becoming a world leader in producing natural graphite and upgrading it into high value products critical to the green economy including anode material for LiBs/EVs, fuel cells and graphene, as well as advanced industrial technologies.

Northern is the only significant graphite producing company in North America and will become the third largest non-Chinese producer when its Namibian operations come back on line in the first half of 2023.  The Company also has two large scale development projects, Bissett Creek in Ontario and Okanjande in Namibia, that will be a source of continued production growth in the future.  All projects have “battery quality” graphite and are located close to infrastructure in politically stable countries.

Gregory Bowes, B.Sc. MBA P.Geo  is a “qualified person” as ‎‎defined under NI 43-101 and has reviewed and approved the content of this news release.

Please visit the Company’s website at http://www.northerngraphite.com/investors/presentation/, the Company’s profile on www.sedar.com, our Social Channels listed below or contact the Company at (613) 241-9959.

This news release contains certain “forward-looking statements” within the meaning of applicable Canadian securities laws. Forward- looking statements and information are frequently characterized by words such as “plan”, “expect”, “project”, “intend”, “believe”, “anticipate”, “estimate”, “potential”, “possible” and other similar words, or statements that certain events or conditions “may”, “will”, “could”, or “should” occur. Forward-looking statements in this release include statements regarding, among others; the Company’s intentions with respect to its operations and development projects. All such forward-looking statements are based on assumptions and analyses made by management based on their experience and perception of historical trends, current conditions and expected future developments, as well as other factors they believe are appropriate in the circumstances. However, these statements are subject to a variety of risks and uncertainties and other factors that could cause actual events or results to differ materially from those projected including, but not limited to unexpected changes in laws, rules or regulations, or their enforcement by applicable authorities; the failure of other parties to perform as agreed; social or labour unrest; changes in commodity prices; unexpected failure or inadequacy of infrastructure and the failure of ongoing and contemplated studies to deliver anticipated results or results that would justify and support continued studies, development or operations. Readers are cautioned not to place undue reliance on forward-looking information or statements.