October 5, 2021:  Northern Graphite Corporation (NGC:TSX-V, NGPHF:OTCQB) (the “Company” or “Northern”) is pleased to announce the completion of the 2021 summer field season on its South Okak Ni-Cu-Co Property in Labrador.  South Okak consists of 473 claims covering 11,825 hectares that are prospective for magmatic nickel sulphide deposits similar to Vale’s Voisey Bay Mine which is located 80 kilometers to the south.  The South Okak area returned some of the best intersections outside of Voisey’s Bay in the 1990s but the area was not thoroughly explored due to a subsequent decline in nickel prices.  The 2021 field program represents the first time South Okak has been examined as part of one consolidated land package using a more complete understanding of the geological and structural controls of the Voisey’s Bay deposits and modern geophysical techniques.

The 2021 program was very successful in improving the Company’s understanding of structural controls relating to existing targets and in identifying new targets.  Over 200 rock samples were collected throughout the property and over 40 kilometers of high resolution magnetometer data was acquired over two high priority areas.  Results will be released when assays are received and all the data has been processed and compiled. 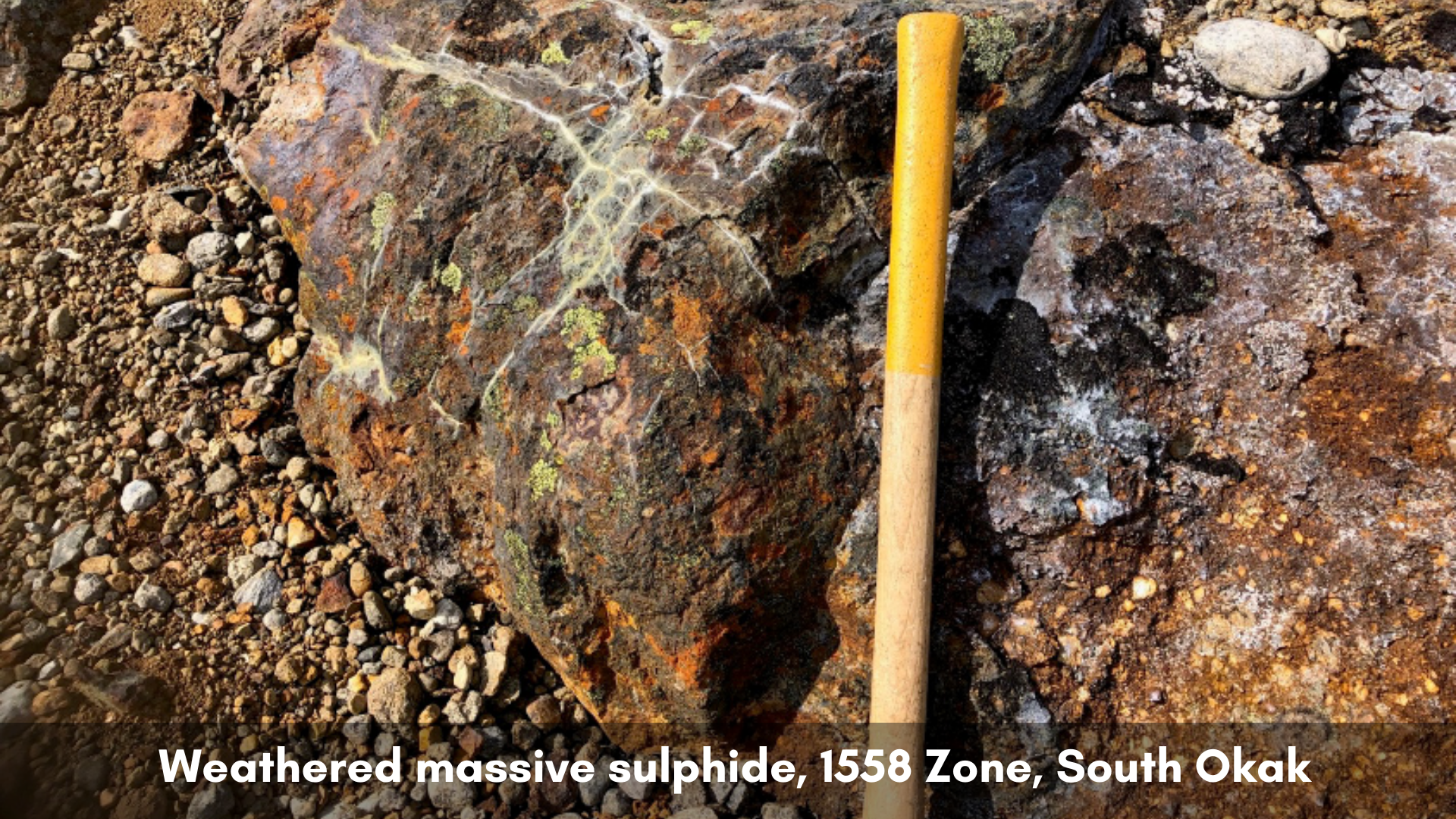 Gregory Bowes, CEO commented that: “The evolution to electric vehicles has created a high level of interest in battery metals such as Ni/Co/Cu and South Okak definitely needs a second look now that the land package has been consolidated and geologic knowledge and geophysical techniques are much more advanced.”  He added that: “Excellent progress was made during the 2021 field season which will enable the Company to design a Phase 2 exploration program that will include a deep penetrating geophysical program and a drilling campaign in 2022.”

The 2021 field program was guided by comprehensive data compilation from historic assessment reports which included documentation of all known mineral showings and geophysical targets as well as 3D inversion processing of the magnetic data.  The focus of the program was to examine and sample all known mineralized zones and to document the style of mineralization and geologic controls when possible.  All significant historical Ni-Cu-Co showings were visited during the field program as well as a number of newly discovered mineralized areas.  Company geologists examined the relationships between known targets on a regional scale for the first time and they were able to make a number of significant observations including;

2. The main mineralized zones within the property occur along a north-south structurally related corridor which will be the focus area going forward.

3. Historical geophysical surveys were segregated by the small claim blocks and it is now apparent many were poorly orientated in terms of known mineralization.  Also, many airborne surveys were completed using antiquated technology which had limited effectiveness, especially in terms of depth of penetration.

Northern Graphite is a mineral development and technology company focussed on developing its Bissett Creek graphite deposit and upgrading mine concentrates into high value components used in lithium-ion batteries, electric vehicles, fuel cells, graphene and other advanced technologies.  An independent study estimates that Bissett Creek will have the highest margin of any existing or proposed graphite deposit due to its very favorable location, simple metallurgy and the high quality of its concentrates which the Company believes will provide a competitive advantage in manufacturing products for the green economy.

Bissett Creek is an advanced stage project with a full Feasibility Study and its major mining permit which puts the Company in position to make a construction decision, subject to financing.  The Project is located in the southern part of Canada between the cities of North Bay and Ottawa and close to the Trans-Canada highway providing ready access to labour, supplies, equipment, natural gas and markets.

Gregory Bowes, B.Sc. MBA, P. Geo., a Qualified Person as defined under National Instrument 43-101, has reviewed and is responsible for the technical information in this news release.

This news release contains certain “forward-looking statements” within the meaning of applicable Canadian securities laws. Forward-looking statements and information are frequently characterized by words such as “plan”, “expect”, “project”, “intend”, “believe”, “anticipate”, “estimate”, “potential”, “possible” and other similar words, or statements that certain events or conditions “may”, “will”, “could”, or “should” occur. Forward-looking statements in this release include statements regarding, among others; economic and technical studies, graphite prices, project economics, permitting, the development timeline and the graphite market.  All such forward-looking statements are based on assumptions and analyses made by management based on their experience and perception of historical trends, current conditions and expected future developments, as well as other factors they believe are appropriate in the circumstances. However, these statements are subject to a variety of risks and uncertainties and other factors that could cause actual events or results to differ materially from those projected including, but not limited to, unexpected changes in laws, rules or regulations, or their enforcement by applicable authorities; the failure of other parties to perform as agreed; social or labour unrest; changes in commodity prices; unexpected failure or inadequacy of infrastructure and the failure of ongoing and contemplated studies to deliver anticipated results or results that would justify and support continued studies, development or operations. Readers are cautioned not to place undue reliance on forward-looking information or statements.