Provides an Update on Operations

November 30, 2022:  Northern Graphite Corporation (NGC:TSX-V, NGPHF:OTCQB, FRA:ONG, XSTU:ONG) (the “Company” or “Northern”) is pleased to report its financial results for the three and nine month periods ended September 30, 2022.  The Company’s Interim Financial Statements and Management’s Discussion and Analysis for the periods have been filed on SEDAR and are available under the Company’s profile.  Highlights for the third quarter include:

“LDI is operating according to plan, sales are successfully being increased in both North America and Europe and we are now focussed on developing more aggressive expansion strategies in both Quebec and Namibia,” commented Hugues Jacquemin, CEO.  “Numerous, active discussions are ongoing with potential strategic and offtake partners and various government agencies and we expect to comment on these developments in the new year.” 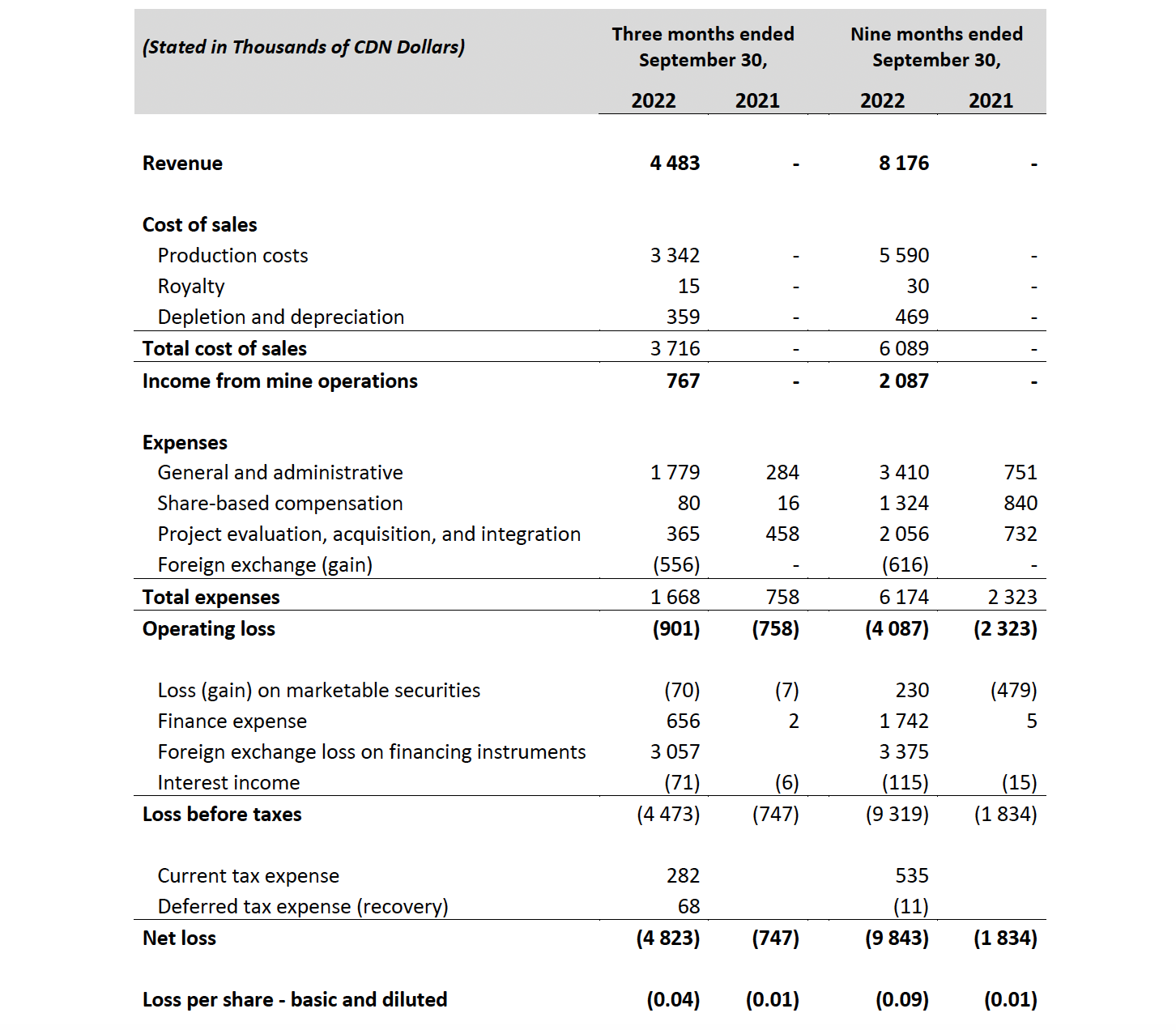 The LDI mine operated normally during the third quarter with production of 3,068 tonnes of graphite concentrate.  Mining costs were lower than in the second quarter due to a reduction in the stripping ratio.  Processing costs increased due to a two week maintenance shutdown, a new labour contract and the effects of inflation, particularly on fuel prices.

Concentrate sales of 2,184 tonnes were achieved in the third quarter.  The sales staff has been expanded, new markets/customers have been successfully accessed in North America and Europe and the Company expects sales to increase to close to 4,000 tonnes per quarter in 2023 based on existing orders.  The Company intends to operate the LDI mine on an intermittent basis with an average yearly production rate of 15,000 tpy (capacity 25,000 tpy) in order to satisfy existing and future customer demand and to continue optimizing inventory levels, particularly high demand grades.  This will extend LDI’s mine life and bridge production without any adverse operational or commercial impacts through to the contemplated start up of supply from the Mousseau West quarry.  With the start up of Mousseau West, the Company expects to operate the LDI plant at full capacity.  Further expansions in the future are possible as the infrastructure at LDI, particularly a fully permitted tailings facility, will enable the Company to operate a central processing facility for other deposits in the area.

The start up of operations in Namibia have been pushed back due to Covid related delays in the shipment of new grinding mills from China.  Accordingly, the Company intends to slow down the retrofit of the Okanjande/Okorusu operation and not make any new commitments to better match capital requirements with cash flows from the drawdown in LDI’s inventories, and to secure offtake agreements to ensure there are buyers for its production at start up.  These delays present the opportunity to evaluate a potentially more sustainable and economically attractive development scenario for the Namibian operation.  This involves installing the new mills in a plant which would be built at the Okanjande mine site.  While this would further delay the startup of operations and require additional capital, it would eliminate ore transportation costs and result in much better project economics.  It would also represent phase 1 of an ultimate plan to build 100,000-150,000 tonnes per annum of graphite production capacity adjacent to the Okanjande deposit to meet rapidly growing EV and battery demand.

As at September 30, 2022 the Company held $4.7 million in cash and equivalents and held $9.1 million of current restricted cash (out of which $7.6 million was released subsequent to September 30, 2022), working capital of $27.5 million and long term debt was $15.3 million (senior secured loan).  Working capital includes $18.4 million of inventory consisting of 6,648 tonnes of graphite concentrate and approximately 7,000 tonnes of recoverable graphite in the ore stockpiles.  While inventories are recorded at cost, their market value is significantly higher and they represent a substantial source of future liquidity.  Additional capital will be required to restart operations in Namibia and advance the Bissett Creek, Mousseau West and South Okak projects but the Company’s capital investment programs are discretionary and flexible and will be managed to minimize the need to raise financing at current share prices.

Annual and Special Meeting of Shareholders

At the Annual and Special Meeting of Shareholders held in Toronto on November 21, 2022, all resolutions were passed with substantial majorities including the election of directors, the appointment of auditors, approvals of the Company’s Amended and Restated Stock Option Plan and Deferred Share Unit and Restricted Share Unit Plan, and approval of certain loans to Company executives to acquire shares of the Company.  Messrs. Hugues Jacquemin and Frank O'Brien-Bernini were welcomed as new members of the Board of Directors.  Iain Scarr and Sethu Raman, who did not stand for re-election, were thanked for their long service to the Company and subsequently added to the Advisory Board.

Northern is a Canadian, TSX Venture Exchange listed company that is focussed on becoming a world leader in producing natural graphite and upgrading it into high value products critical to the green economy including anode material for lithium ion batteries/EVs, fuel cells and graphene, as well as advanced industrial technologies.

Northern is the only significant graphite producing company in North America and will become the third largest outside of China when its Namibian operations come back online.  The Company also has two large scale development projects, Bissett Creek in Ontario and Okanjande in Namibia, that will be a source of continued production growth in the future.  All projects have “battery quality” graphite and are located close to infrastructure in politically stable countries.

Gregory Bowes, B.Sc. MBA P.Geo, the Executive Chair of Northern, is a “qualified person” as ‎‎defined under NI 43-101 and has reviewed and approved the content of this news release.‎

Please visit the Company’s website at http://www.northerngraphite.com/investors/presentation/, the Company’s profile on www.sedar.com, our Social Channels listed below or contact the Company at (613) 271-2124.

This news release includes certain non-IFRS performance measures that do not have a standardized meaning prescribed by International Financial Reporting Standards (“IFRS”). The Company believes that these measures, ‎in addition to measures prepared in accordance with IFRS, provide investors an improved ability to evaluate the ‎underlying performance of the Company and to compare it to information reported by other companies. The non-‎IFRS measures are intended to provide additional information and should not be considered in isolation or as a ‎substitute for measures of performance prepared in accordance with IFRS. These measures do not have any ‎standardized meaning prescribed under IFRS, and therefore may not be comparable to other issuers.‎ The calculation and an explanation of these measures is provided in the Company’s Management’s Discussion and Analysis and such measures should be read in conjunction with the Company’s Management’s Discussion and Analysis and financial statements.

This news release contains certain “forward-looking statements” within the meaning of applicable Canadian securities laws. Forward- looking statements and information are frequently characterized by words such as “plan”, “expect”, “project”, “intend”, “believe”, “anticipate”, “estimate”, “potential”, “possible” and other similar words, or statements that certain events or conditions “may”, “will”, “could”, or “should” occur. Forward-looking statements in this release include statements regarding, among others, plans for bringing the Company’s Namibian operations back on line, advancing other developments projects to production, developing the capacity to manufacture value added products and raising the financing to complete all or any of these initiatives. All such forward-looking statements are based on assumptions and analyses made by management based on their experience and perception of historical trends, current conditions and expected future developments, as well as other factors they believe are appropriate in the circumstances. However, these statements are subject to a variety of risks and uncertainties and other factors that could cause actual events or results to differ materially from those projected including, but not limited to unexpected changes in laws, rules or regulations, or their enforcement by applicable authorities; the failure of other parties to perform as agreed; social or labour unrest; changes in commodity prices; unexpected failure or inadequacy of infrastructure and the failure of ongoing and contemplated studies to deliver anticipated results or results that would justify and support continued studies, development or operations. Readers are cautioned not to place undue reliance on forward-looking information or statements.