August 30, 2022:  Northern Graphite Corporation (NGC:TSX-V, NGPHF:OTCQB, FRA:ONG, XSTU:ONG) (the “Company” or “Northern”) is very pleased to announce that the Company’s Interim Financial Statements and Management’s Discussion and Analysis for the three and six month periods ended June 30, 2022 have been filed on SEDAR and are available under the Company’s profile.   Selected unaudited financial information is presented in the table herein.  Highlights for the second quarter which only include two months of operation at the Lac des Iles graphite mine (“LDI”) following its acquisition at the end of April 2022 include:

“Release of our second quarter results is another important milestone in Northern’s transformation from a development stage company to a producer with revenues, a positive mine operating profit and a strong cash position,” commented Hugues Jacquemin, CEO.  “Becoming the only significant producer of graphite in North America is a good start and we intend to aggressively build on that position through continued production growth, acquisitions and downstream investments.”

The Lac des Iles mine and processing plant essentially operated at design capacity during May and June based on a five day per week schedule.  Throughput, grade, recovery and concentrate quality were all within historical norms.  Costs reflected a higher than usual strip ratio as mining nears the bottom of the pit.   The strip ratio should decline as mining of the next level begins. Some stoppages were experienced for maintenance and repairs subsequent to the end of the quarter.

Work is well underway at the Okanjande mine/Okorusu processing plant in Namibia which is on track for the restart of operations in nine or ten months.  An experienced Namibian General Manager and a Project Manager have been hired and they are leading a team of 25 engineering and maintenance personnel that are focused on cleaning and refurbishing the plant.  Most of the pumps have been stripped and equipment tested, work is progressing on re-energizing the electrical systems and most of the equipment has been turned. Engineering and design work is focusing on the process mass and water balances and the ordering of long lead time equipment including two new, front-end grinding mills and two polishing mills to be installed in the flotation section.  A new tailings dam is required and work is in progress with respect to permitting and gathering the required geotechnical and geochemical design information.

The Company is currently getting quotes from engineering companies with respect to completing a Preliminary Economic Assessment on building a large new processing plant at the Okanjande deposit with the capability of producing 100-150,000tpy of graphite concentrate to serve the EV/battery market.

Efforts with the Bissett Creek project are focused on the final stages of major operating permits, First Nation consultation and liaison with various government bodies with respect to their programs for providing financial support to critical minerals projects.

A high resolution, horizontal magnetic gradient and electromagnetic (“VTEMTM Plus”) airborne survey has been completed over the entirety of the South Okak Ni/Cu/Co Property which is located 80km north of the large Voisey’s Bay mine.  Approximately 1,450 line kilometres of data were collected.  The survey will provide better definition of all known targets on the property, potentially uncover new targets and provide valuable information in preparation for a significant drill program planned for 2023. 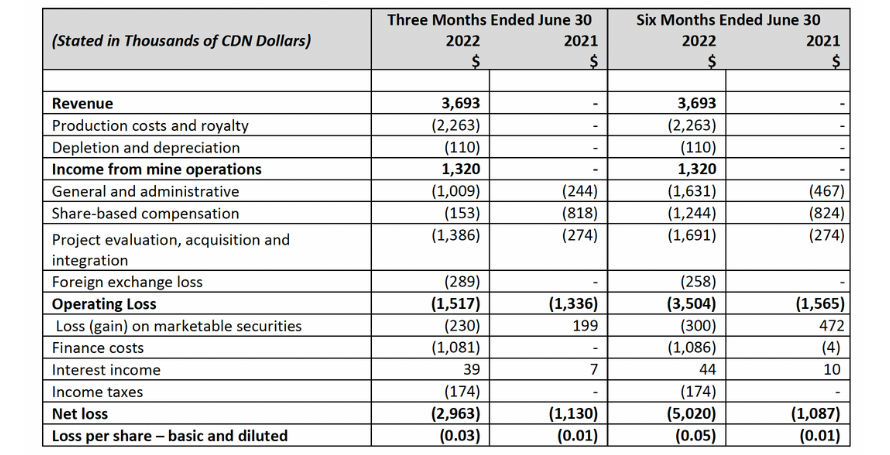 Northern is a Canadian, TSXV listed company that is focussed on becoming a world leader in producing natural graphite and upgrading it into high value products critical to the green economy including anode material for lithium ion batteries/EVs, fuel cells and graphene, as well as advanced industrial technologies.

Northern is the only significant graphite producing company in North America and will become the third largest outside of China when its Namibian operations come back online in the first half of 2023.  The Company also has two large scale development projects, Bissett Creek in Ontario and Okanjande in Namibia, that will be a source of continued production growth in the future.  All projects have “battery quality” graphite and are located close to infrastructure in politically stable countries.

Gregory Bowes, B.Sc. MBA P.Geo  is a “qualified person” as ‎‎defined under NI 43-101 and has reviewed and approved the content of this news release.‎

Please visit the Company’s website at http://www.northerngraphite.com/investors/presentation/, the Company’s profile on www.sedar.com, our Social Channels listed below or contact the Company at (613) 241-9959.

This news release contains certain “forward-looking statements” within the meaning of applicable Canadian securities laws. Forward- looking statements and information are frequently characterized by words such as “plan”, “expect”, “project”, “intend”, “believe”, “anticipate”, “estimate”, “potential”, “possible” and other similar words, or statements that certain events or conditions “may”, “will”, “could”, or “should” occur. Forward-looking statements in this release include statements regarding, among others, plans for bringing its Namibian operations back on line and to advancing its other developments projects to production, and developing the capacity to manufacture value added products. All such forward-looking statements are based on assumptions and analyses made by management based on their experience and perception of historical trends, current conditions and expected future developments, as well as other factors they believe are appropriate in the circumstances. However, these statements are subject to a variety of risks and uncertainties and other factors that could cause actual events or results to differ materially from those projected including, but not limited to unexpected changes in laws, rules or regulations, or their enforcement by applicable authorities; the failure of other parties to perform as agreed; social or labour unrest; changes in commodity prices; unexpected failure or inadequacy of infrastructure and the failure of ongoing and contemplated studies to deliver anticipated results or results that would justify and support continued studies, development or operations. Readers are cautioned not to place undue reliance on forward-looking information or statements.