In the 1990s China dumped graphite on the market to earn foreign exchange which caused a significant decline in prices. Much like rare earths, this essentially killed the industry in the west and graphite prices remained low until about 2005 due to excess production capacity in China.   Then the growth in China, the commodity super cycle and resultant demand from the steel industry caused graphite prices to increase until they reached record levels in 2012.   Shortages were reported.  Unfortunately for the graphite producers, high prices did not last long as a slowdown in the Chinese economy and declining steel demand quickly caused prices to fall back.  No new mines were built in the west during this period.

Since that time prices have been sideways to down as the industry waits for steel demand to recover and for the lithium ion battery (“LiB”) market to get big enough to drive prices on its own as has happened with lithium and cobalt.  LiBs were not a factor with respect to demand in 2012 but have been growing at 20%pa due to the proliferation of handheld devices such as cell phones, camera, laptops, power tools, etc.  Electric vehicles and grid storage are huge markets which are still in their infancy.  LiBs already account for 25% of flake graphite demand and manufacturing plants under construction are expected to triple demand by 2021.  This will require flake graphite production to double in that period of time

Currently, China produces 70 to 80% of the world’s graphite and 100 per cent of the natural graphite used in LiBs.  Because of this dependence on China, as well as the importance of graphite to the economy, both the EU and the US have declared graphite a supply critical mineral. 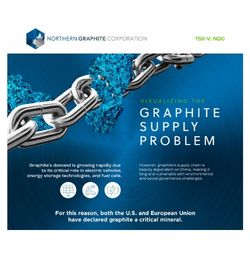 The future direction of Chinese production will be a significant factor in determining where graphite prices go.  Traditionally, Shandong Province was the center of graphite mining in China but its production is declining due to the depletion of ore reserves and stricter enforcement of environmental regulations.  As Shandong was the main source of large and extra large flake graphite, production of these grades is also declining.  Mining has transitioned to Heilongjiang Province and it is now the major producer.  There are two main producing areas in Heilongjiang, Jixi/Mashan and Luobei, both of which produce mainly small flake.

The Jixi/Mashan region is the largest and is operating near full capacity.  There do not appear to be any new mines planned or under construction.  Luobei was principally built to serve the LiB market and is only operating at 30 per cent capacity.  For this reason, it is unlikely small flake prices will increase in the short term until the significant growth in EVs/LiBs consumes this excess capacity.

The market for large and XL flake graphite is much more robust, in part because of declining Shandong production but also because expandable graphite is the fastest growing market along with LiBs.  Expandable graphite is principally made from large/XL flake.  It is used in thermal management for consumer electronics and many industrial applications including heat and corrosion resistant gaskets and fire retardants.  The latter market is expected to grow rapidly as the use of brominated flame retardants is is phased out or banned.  Fuel cells and flow batteries are also new and potentially large markets for expandable graphite.  Also, the steel industry is a significant user of large flake and its recovery will put additional pressure on large flake prices.

Annual Chinese demand for expandable graphite is approximately 70,000 tonnes.  China only produces 25,000tpa of +50 mesh flake and the balance is made up of less desirable +80 mesh flake.  The demand for expandable graphite with very high expansion rates is growing even more rapidly and this requires +32 mesh flake graphite.  There is currently a shortage of both +50 mesh and +32 mesh material in China as there is in the rest of Asia as well as Europe.  China has now started to import +50 mesh concentrates from Madagascar.

In the short to medium term the graphite opportunity is clearly in the large/XL flake markets which are high price and high margin with supply shortages.  Longer term, new western sources of small flake production will be required to meet the expected growth in the EV/LiB markets and provide security of supply.