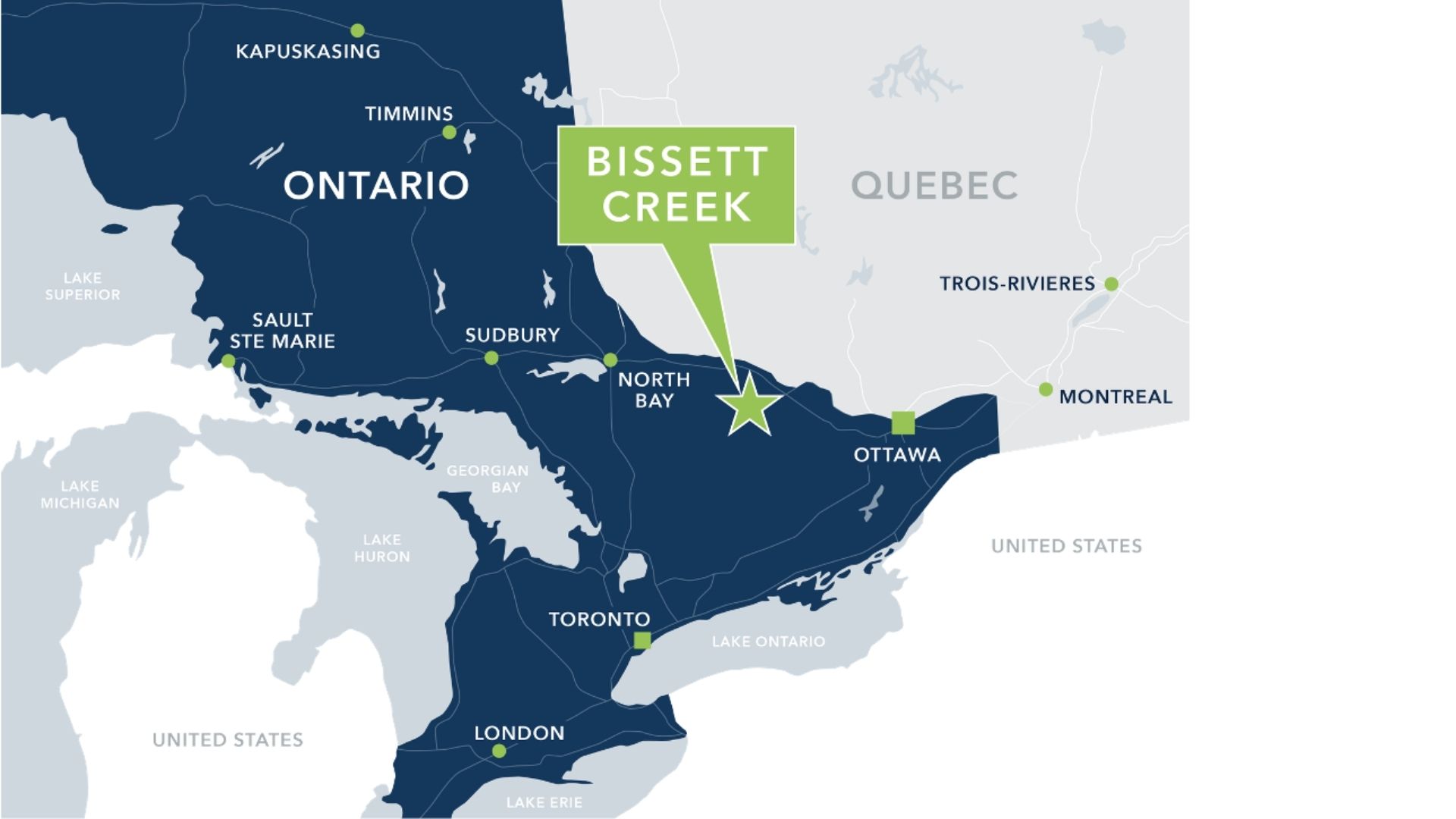 Northern Graphite Corporation holds a 100% interest in the Bissett Creek mining leases and surrounding claims which are located 17km from the Trans Canada Highway between the cities of Ottawa and North Bay, Ontario, Canada. The site can be accessed by a good quality all weather road and labor, natural gas, equipment and supplies, rail lines and water are all readily available. The project is five hours from the port of Montreal and one days’ transport to major markets in northern United States.

In 2021 Bissett Creek concentrates were independently tested by ProGraphite in Germany.  It is one of the world's leading graphite R&D laboratories with several decades of professional expertise and experience. Its testing found that Bissett Creek's concentrates;

An independent study by Benchmark Mineral Intelligence said "Bissett Creek will have the highest margin of any existing or proposed graphite deposit. That is largely due to the simple metallurgy and the high-quality, large flake nature of its concentrates."

A full feasibility study was completed on the property in 1989 by such prestigious engineering firms as Kilborn and Cominco Engineering based on extensive drilling and metallurgical work. It estimated a proven and probable reserve and concluded that the project was economic but it was never developed due to a subsequent decline in graphite prices. Historical information is presented for informational purposes only. The feasibility study and reserve estimates were not completed in accordance with NI 43-101 and therefore should not be relied upon.

Northern Graphite re-activated the project due to higher prices and renewed interest in graphite projects. An additional 6,600m of drilling in 118 holes has been completed bringing total drilling on the project to approximately 12,200m in 275 holes. Resources have been more than doubled and upgraded and currently stand at 69.8 million tonnes of measured and indicated resources grading 1.74% graphitic carbon ("Cg") and 24 million tonnes of inferred resources grading 1.65%Cg (both at a 1.02%Cg cutoff grade) and mineralization has not been closed off by drilling. The Bissett Creek deposit occurs at surface and covers an area of approximately 1.5 by 0.5 kilometres. There is minimal overburden and the maximum depth of the resource is about 80m. Bissett Creek is a very unique deposit in that approximately 90% of the contained graphite will be categorized as large and extra large flake which is believed to be the highest ratio in the industry.

The Company intends to develop the Bissett Creek graphite deposit in two phases.  In 2012 a full Feasibility Study ("FS") was completed with respect to the Phase 1 development and an NI 43-101 Report was filed.  The FS was updated in 2013 and a sensitivity analysis was completed in 2018. This analysis reviewed the effects of current prices, exchange rates and capital and operating costs on project economics and the results were summarized in press releases issued on December 12, 2018 and February 8, 2019.  Phase 2 consists of doubling production after three years of operation as described in an Expansion Preliminary Economic Assessment ("PEA") which was completed in 2013 and filed on SEDAR.  The PEA is the current NI 43-101 Report with respect to the project. Shareholders, investors and other interested parties should refer to the PEA for a complete description of the project.

The Company's Mine Closure Plan has been filed and accepted by the Provincial Government and is the main approval required. Due to the passage of time and a number of changes made to the project, an amended Mine Closure Plan has to be filed.  A number of other operational approvals and permits are required and all are expected to be received in 2019. The Company anticipates being in a position to commence construction in 2022, subject to financing, and to commence production in 2023.

Phase 1 consists of an open pit mine and a 3,000tpd processing plant with conventional crushing, grinding and flotation circuits producing over 20,000tpy of concentrate.   The PEA uses the same mine plan as the FS Update but accelerates the mining of the high grade ore and processes all of the LGS thereafter as part of the Phase 2 expansion. There are an additional 27.3 million tonnes of measured and indicated resources grading 1.62 %Cg which are not included in the mine plan and 24 million tonnes of inferred resources grading 1.65%Cg which are treated as waste. Also, resources have not yet been closed off by drilling and therefore further expansions are possible.

Electricity for the plant will be generated by compressed natural gas (“CNG”) fuelled generators. CNG will be trucked from the main Trans Canada line, approximately 15 kms away. The processing plant includes a sulphide flotation circuit to remove enough sulphides to make approximately 97% of the tailings benign. All sulphide generating waste rock will be backfilled into mined out areas of the pit after five years of operation, and all sulphide tailings after eight years, resulting in low final closure costs and a small environmental footprint.

Probable mining reserves were established based on, and are a subset of, measured and indicated resources of 69.8 million tonnes (“Mt”) grading 1.74% “Cg” based on a 1.02% Cg cutoff. The final mine plan only contemplated a 25 to 30 year operation and resulted in probable reserves of 28.3 Mt of ore grading 2.06%Cg based on a COG of 0.96%Cg. Probable reserves include 24.3 Mt grading 2.20%Cg that will be processed first.  In order to increase head grades in the initial years of production while maintaining a reasonable stripping ratio, measured and indicated resources grading between 0.96%Cg and 1.5%Cg will be stockpiled, largely within the mined out areas of the pit. The total LGS will be 16.5 Mt grading 1.26%Cg and will be processing at the end of the mine life. It also represents a low cost source of ore that could be processed during periods of depressed prices.

Based on the 2013 PEA updated sensitivity analysis as contained in a press release dated December 12, 2018, an average of 38,400 tonnes of graphite concentrate at 94.5% Cg will be produced over the first 15 years of operation.  Cash mine operating costs will average US$642 per tonne of concentrate and capital costs for Phase 1 were estimated at CDN$106.6 million with an additional CDN$47.5 million in expansion capital required for Phase 2.

This results in an after-tax internal rate of return (“IRR“) of 25% and an after-tax net present value (“NPV”) of $198.2 million for the Bissett Creek Project using a weighted average price of US$1,750/tonne for the concentrates that will be produced.