A fuel cell is a device that combines a “fuel”, usually hydrogen, with oxygen to generate electricity, with water and heat as its by-product.  A battery is a passive device that stores energy for subsequent use.

Since fuel cells rely on an electrochemical process and not combustion, emissions from fuel cells are significantly lower than emissions from even the cleanest fuel combustion processes. Water and heat are the only by-products. Fuel cells are also much more efficient than combustion engines in converting fuel to energy. Because they have no moving parts, fuel cells are quiet, durable, reliable and long lasting with little maintenance. Fuel cells can be used in both stationary and mobile applications although the latter requires access to a refueling station. For this reason they are most popular in fleet type applications where vehicles return to a central point each day. Use in personal vehicles is expanding as the network of refueling stations expands.

The bi polar plates in Proton Exchange Membrane Fuel Cells, one of the most popular technologies, requires large flake, high purity graphite. Fine grained graphite is also used as additives and fillers but this is a relatively small component of fuel cells. It has been estimated that there is more graphite in a fuel cell vehicle than there is in a electric vehicle. 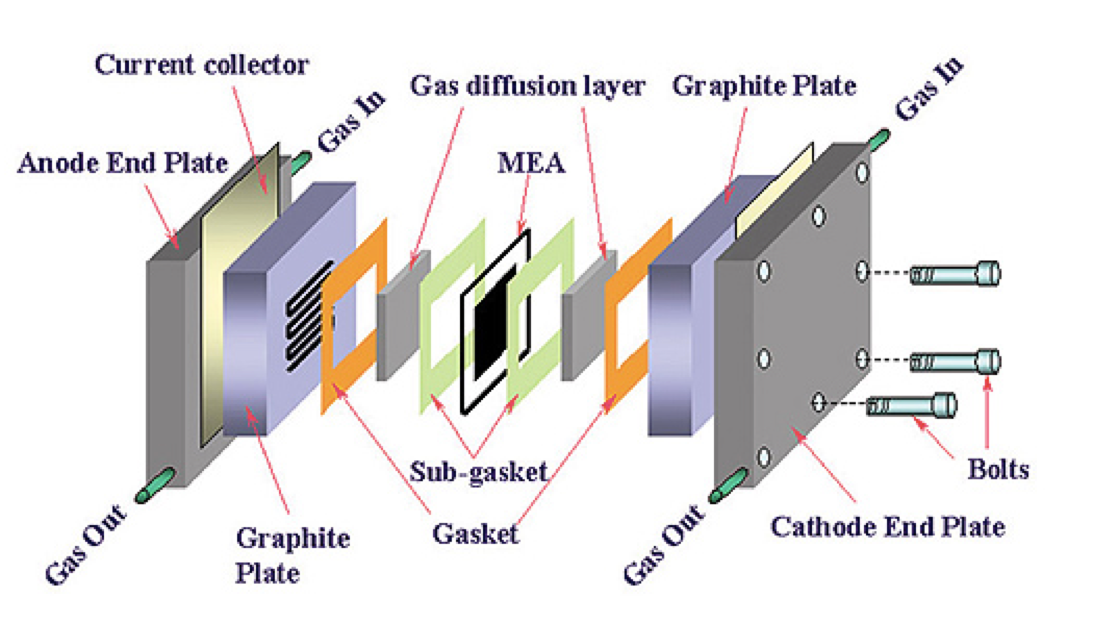 The major markets for fuel cells (from fuelcells2000) are:

Transportation:  Daimler and Honda are already leasing fuel cell vehicles and are being followed by other automakers like Toyota. Fuel cell buses operate in daily revenue service in California, Texas, Connecticut, Delaware and London England.

Large Stationary Power: Grocery and Retail Establishments, Hospitals, Data Centres, Government Buildings, Corporate Sites, Wastewater Treatment Plants, Jails, Agricultural and Beverage Processing Facilities, and Breweries are using fuel cells from 100 kW to more than 5 MW in capacity for primary power. Stationary fuel cells can be installed as part of the electric grid and can also provide reliable backup power in the event of a grid failure or blackout. This allows critical functions such as hospitals, refrigerators, telecommunications, etc to continue running.

Most large stationary fuel cell systems are fueled by natural gas, but anaerobic digester gas (ADG), derived from wastewater, manufacturing processes, or from crop or animal waste, is being used more frequently as a feedstock. ADG-powered fuel cells are being used at a number of wastewater treatment plants, as well as at breweries and agricultural processing facilities. This up-and-coming resource is counted as a renewable fuel in several states.

Small Stationary Power: Fuel cell systems are increasingly being used to provide reliable, on-site, long-running primary or backup power for telecommunication towers and sites. The fuel cells are quiet, rugged and durable and generate reliable, long-running power at hard-to-access locations or sites that are subject to harsh or inclement weather. They are typically in the range of 1 to 5 kW. Smaller stationary fuel cells are also ideal for residential and small commercial applications.

Portable Power: Small, portable fuel cell units are being used for battery charging and auxiliary power and lighting in everything from military, surveillance and emergency response applications to personal cell phone charging. Fuel cells can replace batteries or generators, lightening the load carried into the field, and providing uninterrupted power and extended run-times to field computers and critical communications equipment.

Materials Handling: The U.S. is the world leader in fuel cell forklifts with more than 4,000 systems either deployed or on order. Customers include Coca-Cola, Walmart and Sysco. Fuel cell forklifts can lower total logistics costs since they operate longer, require minimal refilling and need less maintenance compared to electric forklifts. Batteries are heavy and provide on average six hours of run time, while fuel cells last more than twice as long (12-14 hours). Warehouses and distribution centres can install their own hydrogen fuelling station in-house and fuel cell forklifts take only one to two minutes to refuel, compared to the half hour or longer it takes to change a battery. This also eliminates the need for battery storage and changing rooms, leaving more warehouse space for products. Another key advantage that fuel cell forklifts have over battery-powered ones, in relation to the grocery and food distribution industry, is the ability to perform in freezing temperatures, making them suitable to refrigeration and freezer operations.

Hyundai - Hydrogen Must be Part of the Future